In the fall, I'm scheduled to do a presentation on quilt-as-you-go techniques to my guild. I have very little QAYG experience but have always wanted to learn. Since the quilting part is my least favorite thing, I've often wondered if QAYG might be a good solution to my 'fear of free motion'.  FOFM.  No better way to learn something new than by committing to demonstrate it to others. Wish me luck.  : )

I have a disappearing 9-patch that is pieced and ready for quilting. Fell in love with this print that I picked up last year and then filled in with various yellows, pinks, corals, and oranges. These are the big 9-patches before cutting them up. As you can see, I added lattice to the blocks after seeing this quilt by my friend Elizabeth of OPQuilt. My blocks aren't as big because I wanted more blocks for more variety while still having a relatively small lap quilt. 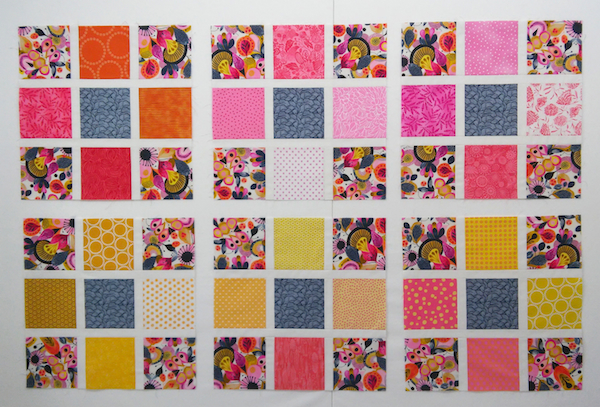 This is how it looks pieced into rows. Next up will be a new to me quilt-as-you go method done row by row. 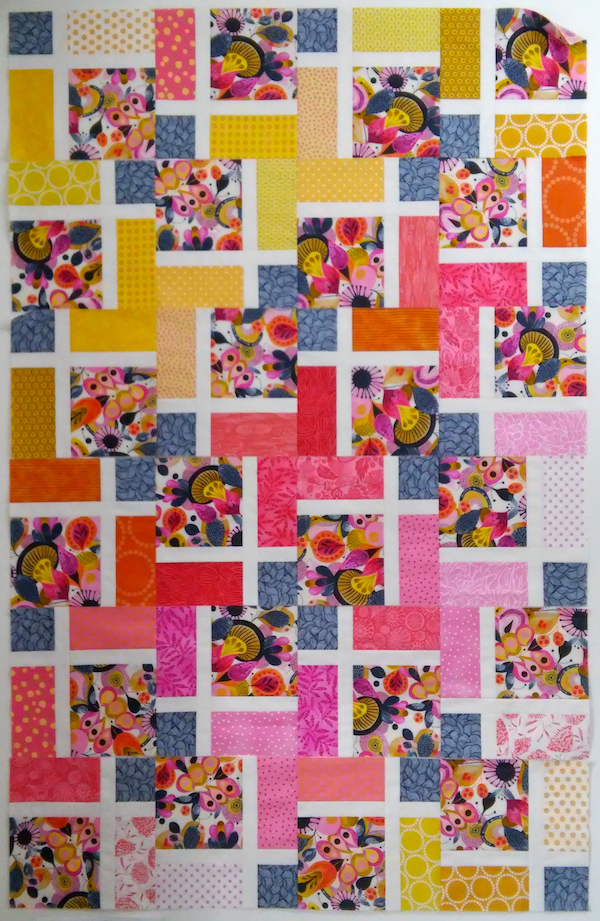 I have also pulled out all my old fruit and veggie fabrics. I plan to use them by making napkins, QAYG placemats, maybe even a QAYG picnic quilt. Given their end use, I decided to prewash which I don't usually do. What a mess of threads that made! 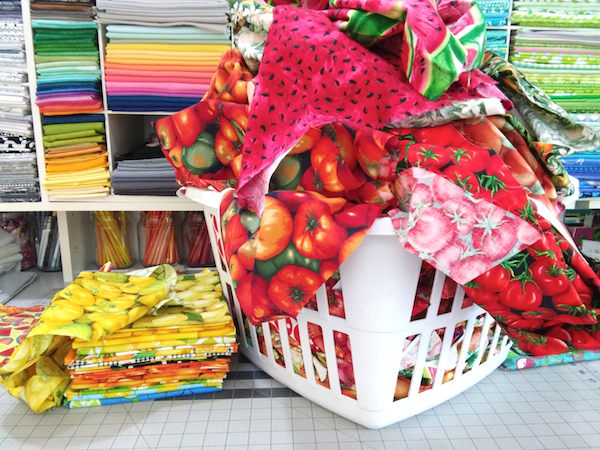 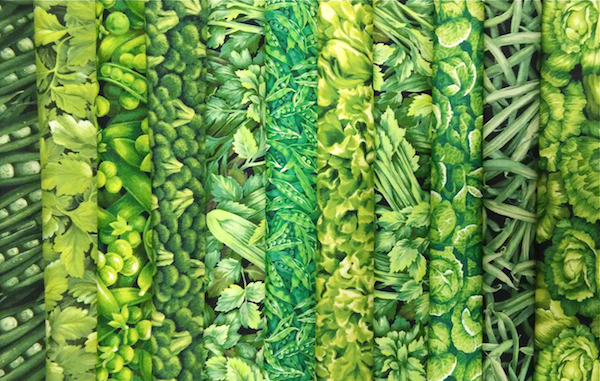 I still have one more small load to wash and then I'll get started. Summer is the season when I use fruit and veggie dishes as part of my kitchen/dining decor so these will fit in nicely. Just need to get them done before summer is over. 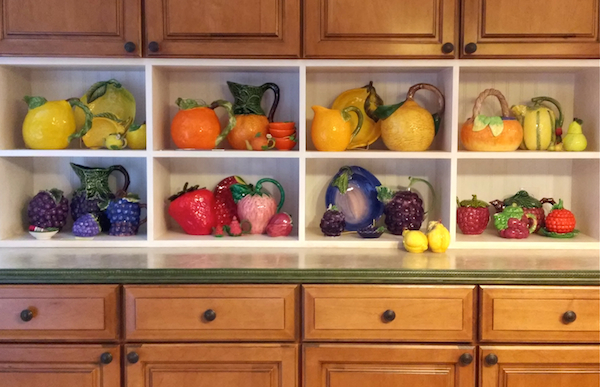 For the last several days, my studio has been swimming with fabric in aquas, dark teal/blues and chartreuse as I cut for a bento box quilt. Years ago I became intrigued with an aqua/chartreuse color scheme I saw in a gift shop and have been collecting fabrics ever since. 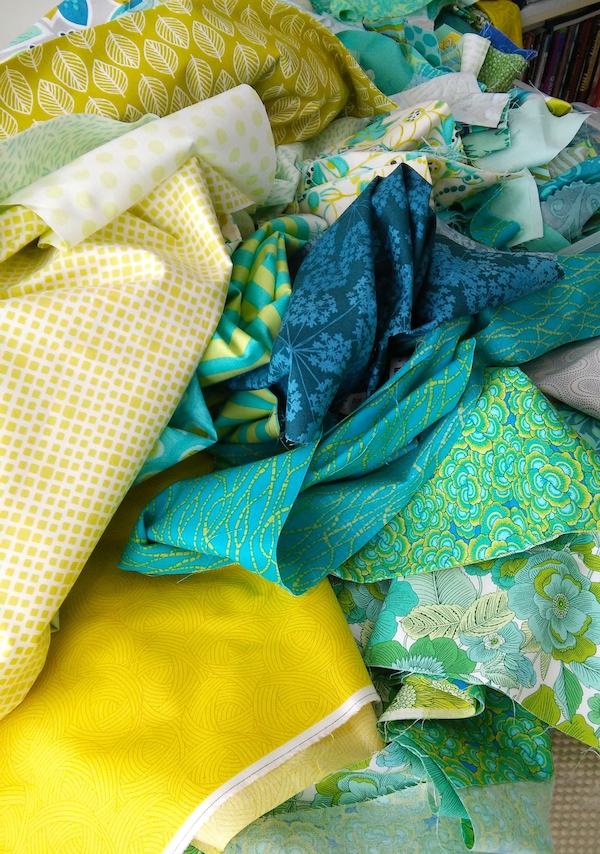 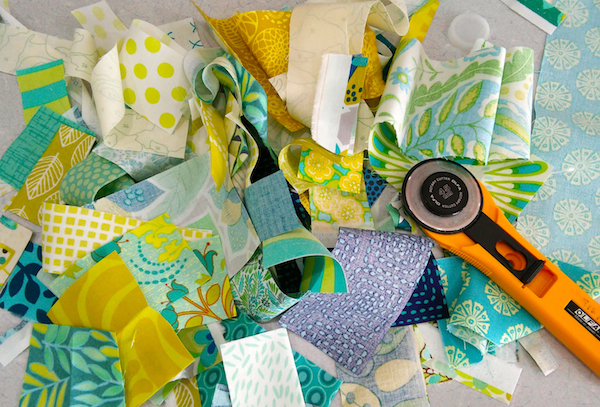 Initially I couldn't decide what quilt to make with this collection. I've always wanted to make both a bento box quilt and an x-plus quilt. The bento box won out because it fit quite well with the QAYG technique I plan to try. I'm using a modified version of the Modified Bento Box Block tutorial by Film in the Frig. I changed up some of the strip widths to better showcase the large scale prints in my fabrics. Seeing this quilt by Anne of Play-Crafts also helped me decide on this design because the color scheme is somewhat similar to mine.

Once the pattern was chosen, the cutting began. I pulled lots and lots and lots of fabrics. And the mess grew and grew. Then it was unfold. Iron. Cut. Cut some more. Cutting was way more time consuming than I expected once I began to consider which fabrics to cut into which widths. In many cases I cut several different widths from a single fabric but in some cases I didn't have enough for more than one width. Here are some of the first strip combinations. 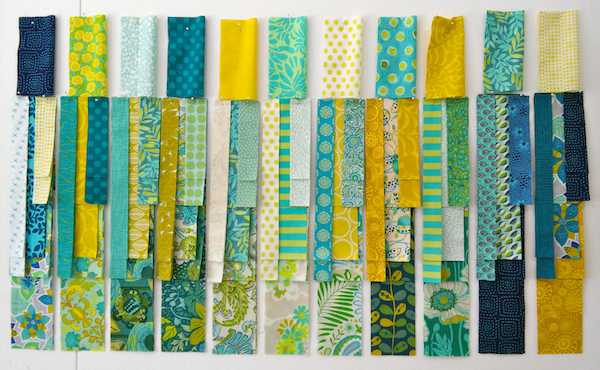 My original plan was a large lap quilt but once my daughter saw the fabrics she feel in love and this has doubled in size to a queen. I have 12 blocks sewn and quartered and 13 more to go. That means more cutting and more fabric combinations for the new blocks. Slowly I'm getting there. Right now it looks like this. 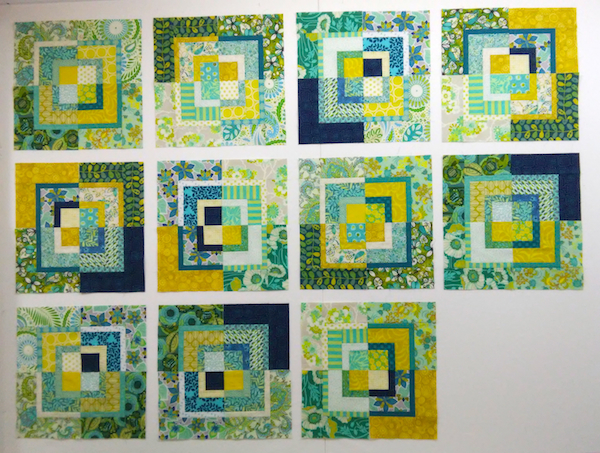 This one will be a long time in the making since I'm doing a QAYG for this too. It will certainly be a good test of making a large quilt using QAYG methods and I'm more than little apprehensive about it. Wish me more luck.

I'll share more about my exploration into quilt-as-you-go after the presentation. It should be an interesting experience with plenty of pros and cons along the way. I was quite surprised at how many different QAYG techniques there are once I started researching. Marianne at The Quilting Edge is the master as far as I'm concerned. Her work is amazing. She has some good tutorials on her method which you can find here.

Have you used QAYG techniques and if so, do you have a favorite method?