Welcome to my Arboretum, a most colorful forest of fabric trees. 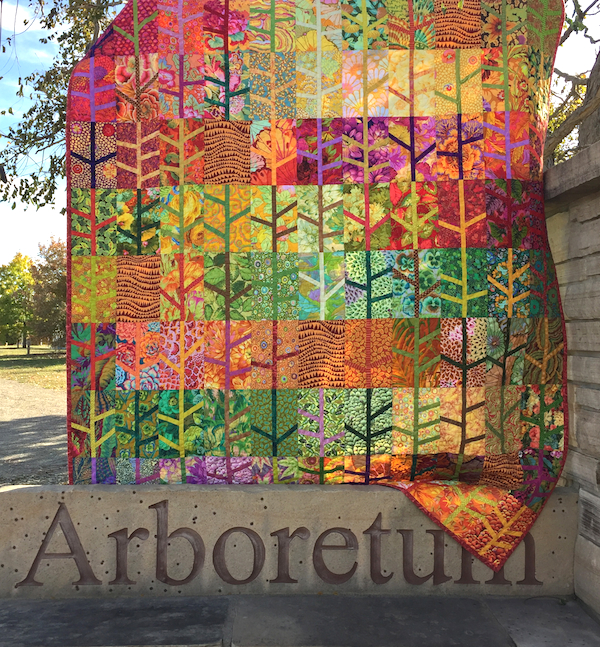 This quilt wasn't even on my radar. One day I just happened to notice a few Kaffe Fassett fabrics in brownish colors on the shelf and suddenly quilter's ADD took over. Since it's fall, those browns and rusts were begging to be used and leaves seemed the perfect fall subject.

Inspired by those fallish prints, I looked through my Pinterest board on leaf quilts for inspiration. Several pins sparked ideas. Unfortunately, the pin I was most inspired by led to no further links or information, so I took off on my own. 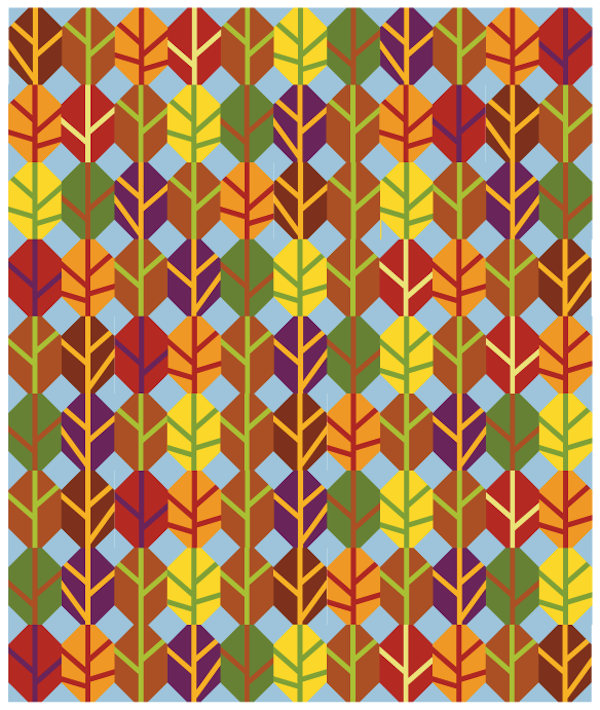 Next I pulled a ton of prints in a range of fall colors. Starting with the browns and rusts, I added reds, oranges, golds, yellows, greens and even purples. As I said in my previous post, more is more as far as I'm concerned. More variety makes for more interest and more visual activity.

I cut one rectangle approximately 6.5" x  9" from 99 different fabrics. I was determined not to repeat any fabrics and easily found more than 99 in my stash. Next I pulled strip scraps in the same color range for the veins (branches) and cut them 1" wide.

At this point in the process, I planned to add small triangles to the corners of each block to give it a leafy shape. I thought I'd use solids and tried a couple of different light blues as you can see here. 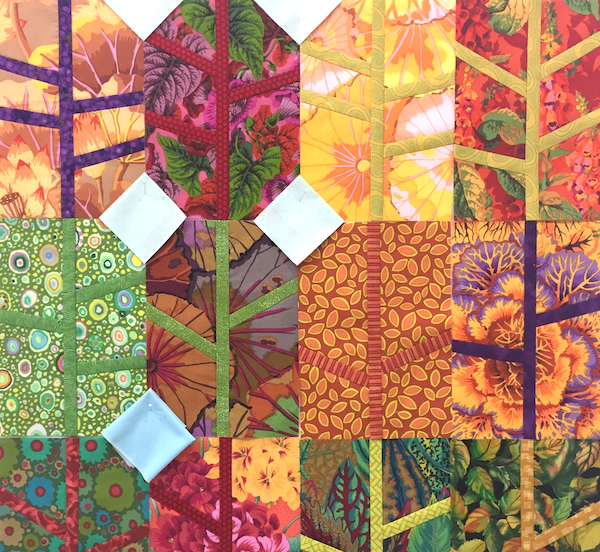 The more blocks I made, the less I liked the corners. Then my husband wandered in and said he liked my trees. So my leaves became trees with branches.

The piecing process for the branches was completely improv. First, I cut a print rectangle in half top to bottom. Then I made angled cuts in both halves. The placement and angle of each cut was random. Most blocks have three angled cuts. Some have only two. Others have four or even five. There's even a couple with just one. The 1" strips were sewn between the angled cuts and pressed toward the strips. When both sides were done, the center strip was added between both halves. The finished block was then trimmed to 6" x 8.5" 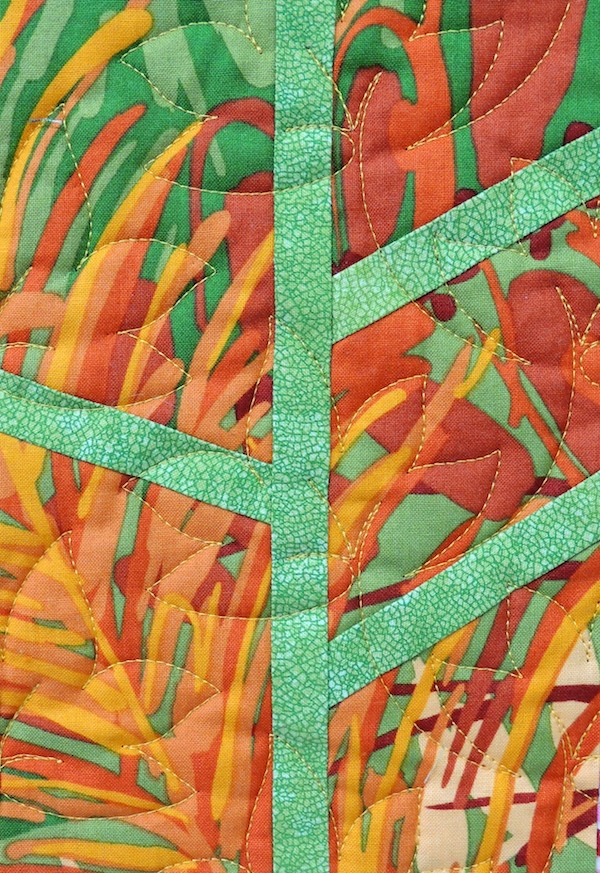 I auditioned each strip fabric for each print as I went choosing not to cut too many of any one fabric. Some branch fabrics blend with the tree fabric and others have a strong contrast. Having some of each allows for the overall effect to come in and out of focus as you look at the quilt. 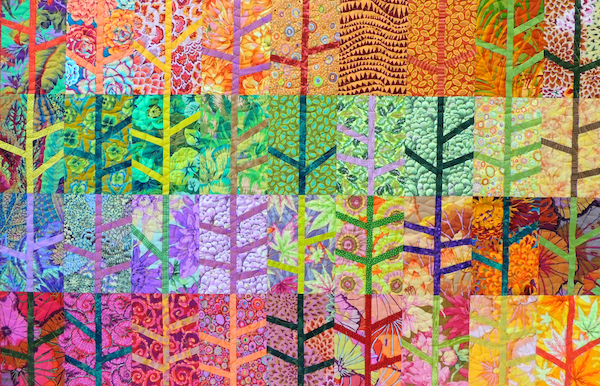 I had no preconceived idea of how to arrange the blocks but as more of them went up on the design wall I liked the look of the horizontal runs of color that were starting to happen. Once about 3/4 of the blocks were up I could begin to see what colors I needed more of. At this point I let go of the idea of 99 different trees and inserted 5 blocks of the same fabric called Shark's Teeth by Brandon Mably. To me this print looked like trees on hills. Repeating this fabric offered a very subtle pause within the forest. 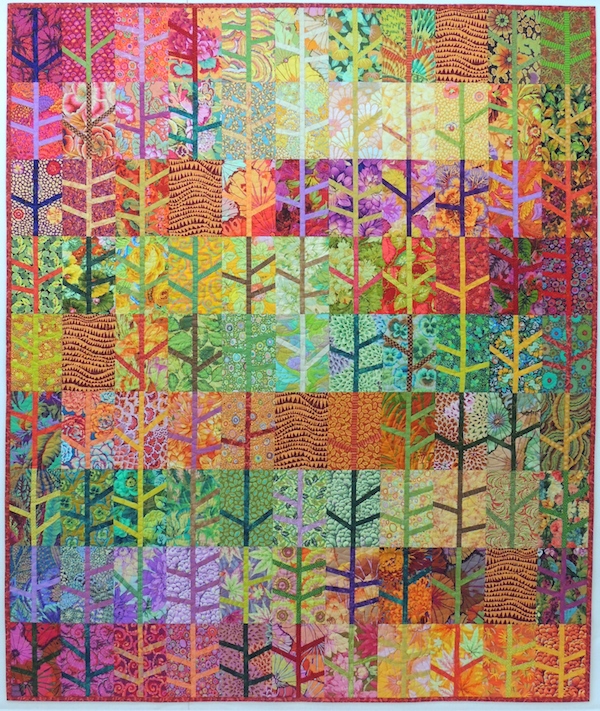 I considered staggering the rows (below left) but it just looked too busy. There's a lot going on with all the prints. Keeping the tree trunks lined up (below right) provides a subtle sense of structure and unity. 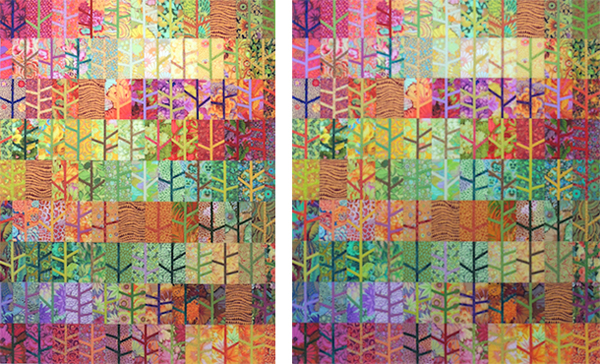 It was quilted by Cara of Sew Colorado Quilting with a leafy design appropriately called fall foliage. It's subtle but the leaves have branches just like the trees. 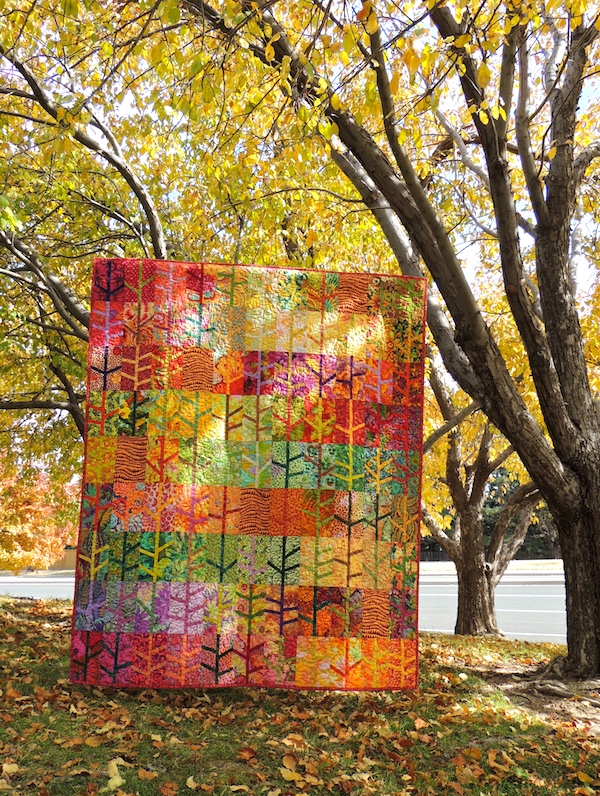 I had hoped to get some great 'in the wild' photos with glowing red/orange fall foliage. Unfortunately we had a very early hard freeze and the colors just haven't been pretty. I settled for some yellow trees near home. My favorite pic is the opening photo near the city arboretum. The sign is what actually gave me the idea for naming the quilt Arboretum. It seems quite fitting.

So many people have asked about making this quilt. If you make one similar to mine, I'd really love to see it. Tag me on Instagram @springleafstudios and use #arboretumquilt to your posts.

While making Arboretum, I discovered that Scott of Blue Nickel Studios has a new pattern called TreeTime that is really cool. Check it out here. Or take a look on Instagram at #treetimequilt. It's a different, yet similar idea and I love what he did with the his trees.

UPDATE: While doing a little online shopping, I just happened upon a new to me tree pattern that is very similar to what I made. The construction method is different but the result is close to the same. The pattern is called Tangled Trees by Lizard Creek Quilting Here's a link to that pattern.

Linking up with Wendy and her Peacock Party.
Also Kelly and Needle and Thread Thursday.
And Cheryl's Monthly Favorite Finish .