I posted earlier about buying a layer cake of the fabric collection called Tradewinds made by Moda. Now I rarely buy a whole line of anything. Not so much because I don't want to, more because my budget just doesn't allow for all my wants. Besides, I keep telling myself I need to work with all the glorious fabrics I already own. But this time I splurged. And then, instead of adding it to my stash, I made the top and actually quilted it! Probably no big deal to many of you but quite out of my norm. I tend to be a topper all too often instead of a true quilter. Working on breaking that bad habit. 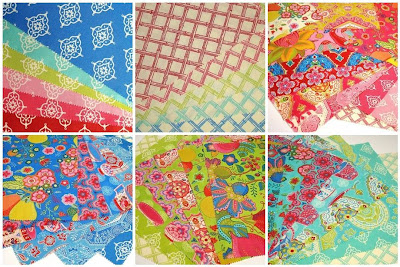 I used a variation of my own pattern called Cascade (available here) to make the quilt. The fabric with the lattice design said napkins to me and the triangles in the quilt design made me think of folded napkins tucked under a plate. I bought additional yardage of the lattice prints and used the layer cake squares for the main blocks. Didn't plan on a border when I started but once the blocks were pieced they just wanted to be contained and given a little breathing room to set them off. Plus adding a border made the quilt finish at a better size for a tablecloth. I used a 2-color extra wide binding to echo the colors in the corners of the quilt. A little red check for the backing finished off the summery tablecloth/picnic feel. 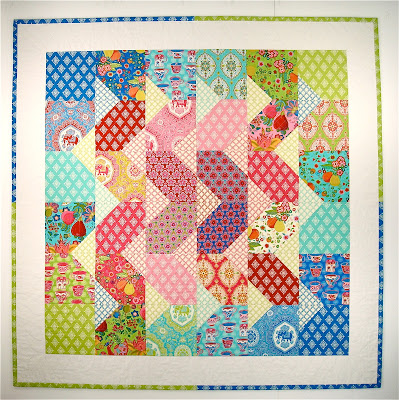 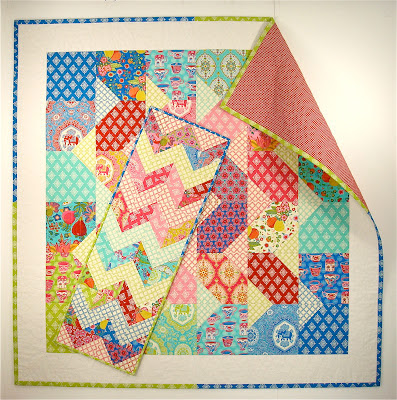 One of the extra features in the Cascade pattern is the use of leftovers to make a second project. I thought I'd use the bonus blocks to make some coordinating napkins but just wasn't feeling any of the layouts. The thing about the bonus blocks is they are a result of the trimmed corners from the larger quilt blocks. Easy peasy to make as you sew the quilt blocks, but what you get is a result of the fabric combinations used for the quilt. Lots of layout options to consider with these extra blocks but I just didn't like them as napkins. When I abandoned the napkins and tried a zigzag layout I knew a small table runner was the answer. Love how the chevron design fell into place.  I decided to skip the border on the runner once I realized it fit perfectly on my side table as is, plus I had just enough leftover quilt backing to back the runner. Gotta love when that works out.  : ) 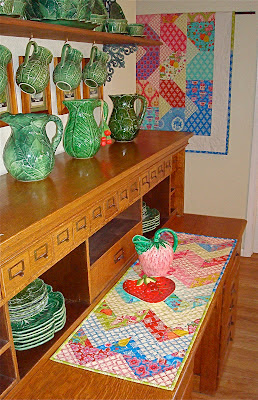 Then my daughter pointed out how well the fabrics went with my colored vase collection. She's got a good eye for design don't you think? 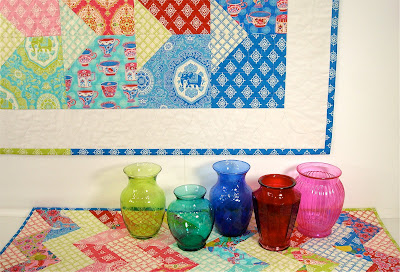 I also posted earlier about the frustration of trying to quilt the top.  : (   Since I envisioned this as a tablecloth, I thought I'd make it lighter weight and thinner than a normal quilt. Didn't quite turn out as I imagined though. I used a piece of flannel instead of batting. Thinner, yes . . . lighter weight, not so much. As a matter of fact, it's rather heavy which was part of my quilting frustration. That and a kitty who wanted to help by sitting on top while I tried to move it around under the needle. The two just do not work well together. But she sure is cute. Meow! 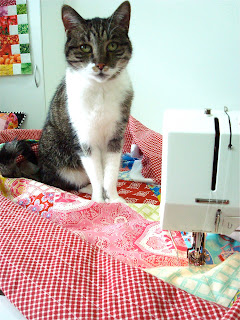 The frustration level went down when kitty left and I had a day to regroup and relax. I quilted a grid on point in the inner red/pink area and then straight lines around the blue/green outer edge. The border got some free motion loops that echoed the design elements from one of the fabric prints. The eclectic bazaar feeling of the prints seems to call for some hand work as well. Now I'm not one to do hand quilting. As a matter of fact I've never done any hand quilting. But there are so many beautiful things being done by some of you that I feel inspired to give it a try. I might try some pearl cotton hand stitching in the borders. What do you think? Red? Blue? Green? Pink? Small pointed half circles between every two loops? 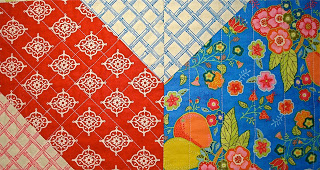 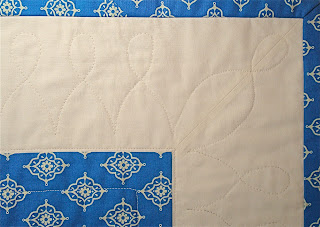 So this about sums up my Tradewinds experience:
Loved the Tradewinds collection and all it's variety.
Will definitely look for more fabric collections to work with.
Won't use flannel instead of batting again unless it's something small.
May try hand quilting but for now other project deadlines take priority.

All in all, I'm very happy with how both these projects turned out. Now it's time for afternoon tea in the backyard. Ta Ta . . . 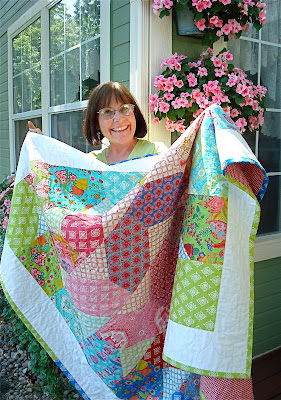