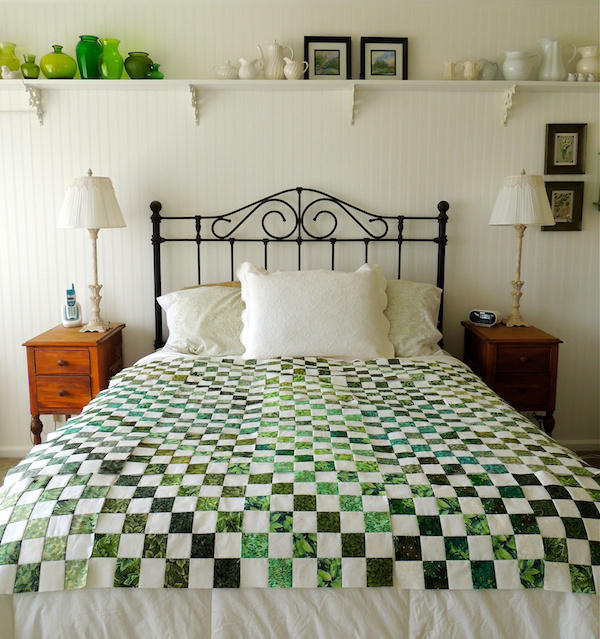 Years ago I saw a blue and white checkerboard quilt in a home decorating magazine and it really made an impression. It was so clean and crisp, yet simple and striking. My version is green and white and I'm hoping to use up a lot of the traditional leaf prints I have leftover from my impressionist quilting days. They may not be modern fabrics but they do go really well in our bedroom. 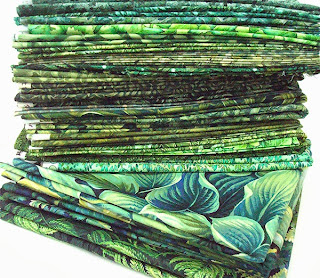 I bet many of you have made a Scrappy Trip Around the World quilt. It's based on this great tutorial from Bonnie Hunter of Quiltville and has been around for years. Just google Scrappy Trip or look for examples on Pinterest. The variety is amazing. Truth be told, I'd love to make many more of these. Maybe an all Kaffe. Maybe an all floral. Perhaps even an all low volume. Guess I ought to start cutting loads and loads of strips.   : )

Last year I had my BMQG members make blocks for this baby sized quilt in an attempt to use up some of my greens and aquas. Barely made a dent in my stash not to mention I discovered how few blues I have. That just led to more fabric, not less. I'm sure that never happens to you . . . haha. 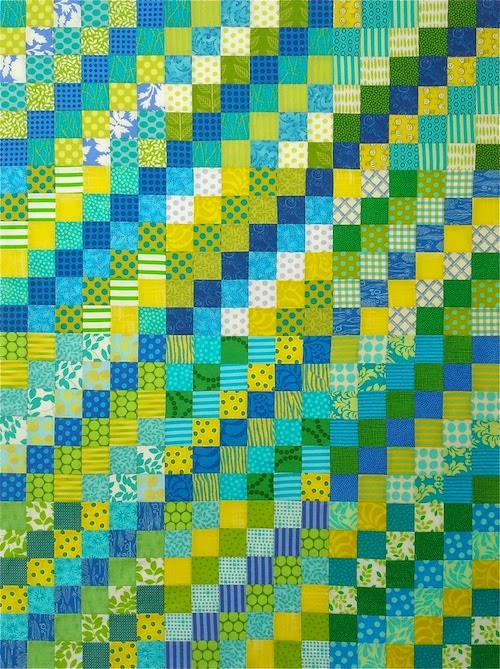 Now I'm working on my leafy version. I like how the scrappy trip technique creates diagonal lines of different fabrics. I wanted to take advantage of this effect to emphasize different values and even different green hues throughout the quilt rather than have it be totally random. 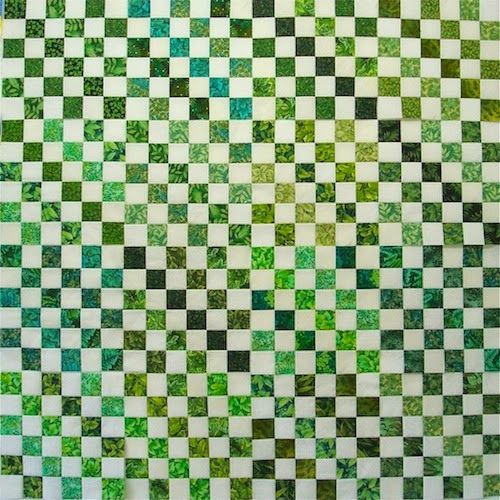 As easy as this block is, there is one part where I tend to make mistakes so I thought I'd pass on a few tips. I'm assuming you are familiar with Bonnie's technique. If not, this won't make a lot of sense, so go check out the tutorial. I'd highly recommend learning her method. Once you try it you just might find yourself making multiple Scrappy Trip quilts like me.

TIP:  Like any project, working assembly line speeds up the process. After cutting loads of strips, I grouped them by greens and then sewed the strip sets together assembly line fashion using chain piecing. I managed to get quite a nice stack of them done at the guild retreat in just a partial day. 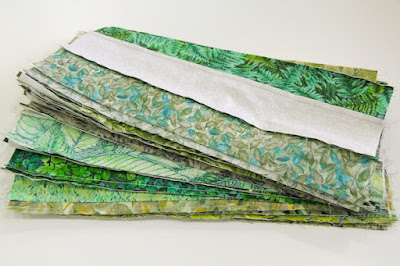 If you know the tutorial, you know each strip set is sewn into a loop. Then the set is cut into segments, then you un-sew. Yes, I said un-sew. It sounds crazy but it really is a great method for this block.

TIP: Use the same assembly approach to cutting, and use some painters tape to mark the 2 1/2" mark on your ruler. Cutting just one segment the wrong width can wreck the whole strip set as you might not have enough for all 6 segments. 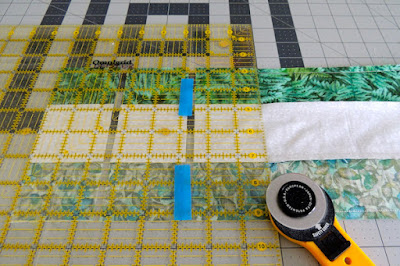 Once the segments are cut, the tutorial calls for un-sewing the loops to produce 6 segments with a staggered fabric placement. This is the point where I inevitably make a mistake by un-sewing the wrong seams.

TIP:  After cutting a strip set into segments leave them on the cutting board and slide the individual segment loops so all the seams you need to un-sew are at the top of each segment. I do this by leaving the first segment on the left as is. Then with the second segment in the row, slide the fabric loop so the white fabric is now at the top. With the third segment slide the fabric so the green that's at the bottom of segment #1 is now at the top. Continue sliding so that each segment has a different fabric at the top. You can see if you have it right by checking for the staggered progressive placement of the different fabrics. See the bottom photo.

TIP: Once they are properly positioned, clip them together along the edge you need to un-sew. This way there's no mistaking what to do when you get back to it. I find it nice to get several groups ready to un-sew and then do it in front of the TV in the evening. Be sure to clip the groups back together after you un-sew so the strips don't get mixed up. 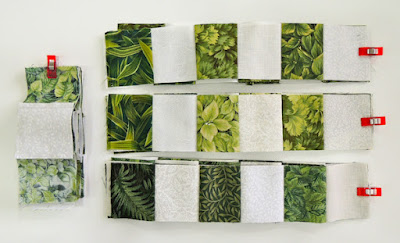 Now compare the last two photos below. In the one on the left the sequence is correct and all diagonals have the correct fabric placement. In the photo on the right the sequence got mixed up, so even though the center diagonal is all the same fabric, the other diagonals are off. The fabrics aren't the same in each diagonal.

TIP:  Before sewing your strips together, take the time to be sure the diagonals all line up correctly. Sew them together into strip sets of two. Once you have three sewn strip sets you still have time to rearrange the layout and place a different fabric in the longest diagonal just by switching up the sewn segments. Before sewing the sets together check again that they are in the correct order. 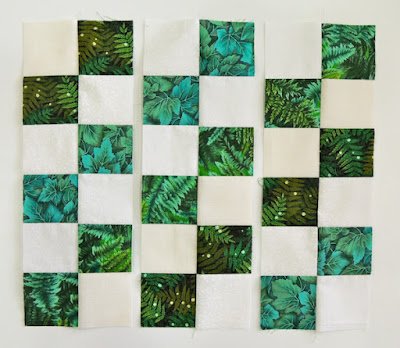 TIP: Instead of pinning, use the tip of your small scissors or a stiletto to hold the seams together. If you pressed to the side as the tutorial instructs, there is no need for pins. Just line up the first seam intersection by nesting them together. Stitch through the intersection to secure. Stop and line up the next intersection. Continue until the entire seam is sewn. It's much quicker than taking time to pin and I'm generally a pinner. Chain piecing also speeds things up. 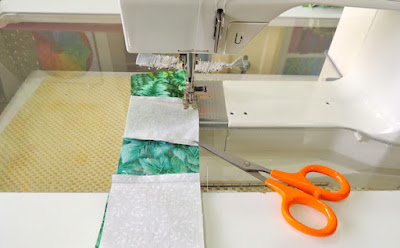 Now that I have this system down for un-sewing, the process is going along quite smoothly. I still have many more blocks to make for a queen size quilt so this block may continue to be my go-to for guild sew days. It's easy to have at the ready in my plasitc storage box. Have you made a scrappy trip quilt? If so, what type of fabrics did you use?  Solids?  Modern Prints? Kaffe?  Traditional?

I'm linking up with WIP Wednesday at Freshly Pieced.